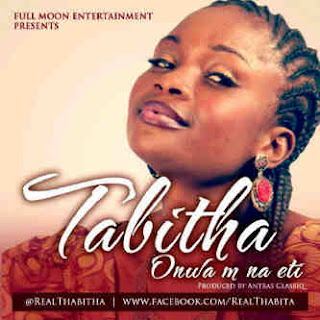 Tabitha is an artiste from  Anambra State which was brought up  in Lagos. She ventured into Music about 10 Yrs ago. Worked with Vanpee an Enugu based Producer/Artiste on the Hit Song ‘Carol Leave Ashewo’ In 2004. Formed and Led a Dance Group in her undergraduate days called Rota-Angels. A dance group that held it sway at Rotaract/Rotary Functions in and around the South East.
She had a little stint with Modelling in 2006 when she featured in the then popular Fashion Show ‘Nigerian Television Fashion Show’ (NTFS). She studied Archaeology and Tourism in University of Nigeria Nsukka. She also got a degree in Political Science from Anambra State University. She relocated to South Africa for more Academic Pursuit where she studied Human Resources from Fernwood Business College Braamfontein Johannesburg South Africa.
This Beauty and Brain has just made a come back into the Music Industry with her first Single ‘Onwa M na Eti’ an igbo acronym that means it’s my time released under the Management of The Moon Entertainment. This Indigenous Rapper/Singer who raps in Igbo with a fusion of Pidgin English as well as Yoruba Language has set to leave no stone unturned in making sure her fans get the Best of her style.
DOWNLOAD