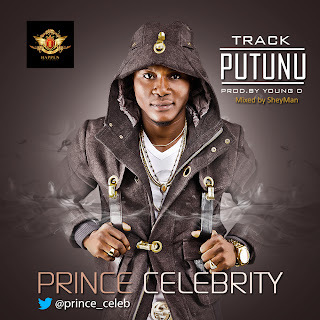 Happen Entertainment presents PUTUNU the official single of Prince Celebrity. Having worked with top notch Artistes and Producers  such as rave of the moment DTunes, SheyMan, T.Frizzle, Stidman, Ace producer Young D and a host of others, He finally drops PUTUNU a party Banger that makes you want to dance over and over again once you hear it play.
Prince Celebrity has performed on big stages and the most recent was when he performed as the opening act when D’Banj was hosted at the Industry Nite on THE 29TH of MAY. PUTUNU was produced by Young D and mixed by SHEYMAN. What are you still waiting for?, hit the Download link, Press Play and thank me later