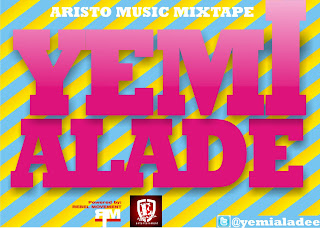 Good news as ‘Ghen Ghen Love’ singer is packaging a mixtape titled ‘Aristo Music‘; which will be released soon as a result of this her debut album will be pushed a few months back. The mixtape will showcase the diva’s rapping skills which she blessed fans with on ‘Uche Face’ featuring boy-band L.O.S as well as her powerful voice and also will have numerous guest appearances from both established and rising acts.
As today is Yemi Alade’s birthday she is releasing the first single as a off ‘Aristo Music’ in celebration and it features Jos rapper ‘Suranu’; the second single featuring Knighthouse singer ‘Ms. Iye’ will be released in a week’s time. ‘Dance Make I Dance’ is a re-make of 2 Chainz ‘Bands a Make Her Dance’ and sees the Effyzzie Music recording artiste goof around and shockingly wows with her bars and Suranu is a beast as usual. “Dance Amake Dance, Money for Ground…” Enjoy!
CONNECT WITH YEMI ALADE:
Twitter: www.twitter.com/yemialadee
Facebook: http://www.facebook.com/pages/Yemi-Alade-Fan-Page/219413694749000
FOR BOOKINGS & ENQUIRES: [email protected]
DOWNLOAD

Skales wraps up the year with a new single - Inumidun. Following the release of - Tell Us, one of the talented Nigerian artists, Skales...
Read more

The Nomination for The Headies Award 2020 is out. Nigeria's biggest Music Show, The Headies has rolled out the nomination list for the 2020 event...
Read more