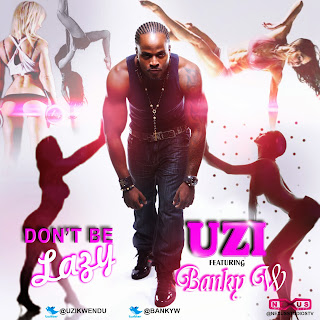 @Uzikwendu & With a style of delivery only comparable to the likes of Twista and Busta Rhymes, this spectacular rapper is without a doubt one of the fastest rappers on the world music scene. ‘Uzi’ popularly known as ‘Mr. FastForward’ was born Uzikwendu Tobechi Onunaku in London, England on the 31st of July

He has left footprints in the industry, which is self-evident in his performances at the COPA event Lagos 2011, Rhythm Unplugged 2011, Rap Act 2012, Sound Sultan’s Industry Nite 2012, Jimmy Jatt’s Black party 2012 amongst others.

Ever since, he has also released and featured in quite a few songs In Nigeria which include ‘Stay Stunting’, ‘Yago’ feat Sound Sultan, Ayanyai, Aha, Superman, DJ Neptune’s Eminioba along side Poe, Phyno, Ruggedman, Reminisce, DJ Neptune’s ‘flow so hard’, Godwon’s ‘Forever Young’, Godwon’s ‘Dollar Bills remix’.
Hitting the airwaves at the moment is this beautiful song for the ladies -‘Don’t be Lazy’ feat. Mr Banky W. and Uzi is definitely bringing sexy back.
There is no doubt Uzi is poised for Longevity
ENJOY!!!

Nigerian Singer, Davido has revealed that he can't sleep amid the crisis plaguing the country. Davido in a tweet on the 22nd of October 2020...
Read more