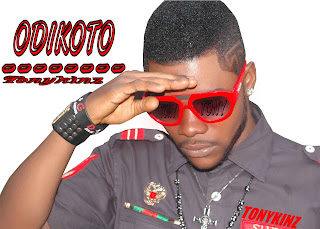 Anthony Akinyemi Taiwo porpularly known as Tonykinz is a hiphop
artiste who hails from Ijebu-Ode, Ogun State, Nigeria in West Africa region.
He was also born and brought up there by his parents. He is the Second
Child but the first son among the three children of his parents. He graduated
from Abraham Adesanya Polytechnic Ijebu-Igbo, Ogun-State in the year
2010 where he studied Electrical Electronics Engineering.
He started singing since his childhood but professionally in the year
2008 while he did a track, titled “Let’s Dance”. Though! It wasn’t easy then
but despite that, the song gave him more courage to belive in himself which
has being pushing him forward and making him exploiting in music
industry. After several challenges & hard works, Anthony preferred to be
called Tonykinz.
He always dream of becoming a superstar with maximum support
from his parents who so much believe in his dreams and ambitions.
Tonykinz is a Rapper (both Indigenous & English) and at the same
time a vocalist i.e. he sings and rap in both Yoruba and English as well. But
his music style is basically “AFRO-POP”.
His music pattern is so unique and uncommon and that has being
keeping his eyes firmly on the ball till date. Tonykinz is a multitalented
triple threat i.e. he’s endowed with three great different talents e.g: “he is a
song writer, also a vocalist and as well a Rapper”.
After various tracks and experience in the industry, Tonykinz decided
to drop four singles titled, “ODIKOTO, and TINGALIN off his upcoming album.
Tonykinz is ready to give you new things u’ve never heard and seen
before even beyond your expectation. and with your support, all these can
be achieved easily. His hubbies are: Singing, Reading, Clubbing & Playing
games.
Tonykinz is a cool and God fearing minded guy but always hot
whenever he handled the MIC because he’s verily ready to be the hottest
guy on TV. And now He’s out with these bangs, feel his talents by
downloading his tracks. Download, feel it, like it, enjoy it, broadcast and
share it.
God bless u as u show some love.
Join Tonykinz on facebook at: “Tonykinz Anthony Akinyemi Taiwo”,
Twitter: “@Tonykinz Odikoto” and BB: “20EF0D88”.
STAY BLESSED!!!!!
TINGALIN
DOWNLOAD
ODIKOTO
DOWNLOAD