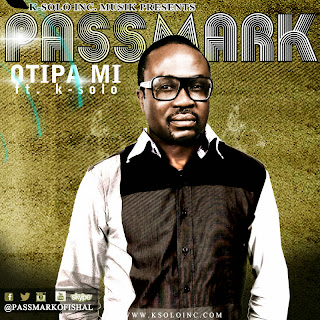 Introducing Iyke Ezeji Known a PASSMARK and Hails from Imo State, a Graduate of University of Calabar in Accounting and Economics also Prospering Student of Law.

PASSMARK is back in the building with yet a Brand New hit – and seems determined to stay there. In celebration of ember Months & A True Life Experience Inspired this Song “OTIPAMI” ,K-Solo iNC Musik is releasing “OTIPAMI” a special track dedicated to all his female fans and music lovers, Which also Featured One Nigeria’s Producer Extraordinaire “K-SOLO” And Produced by same heavy hit producer, K-SOLO.

PASSMARK delivers what he does best – amazing vocals and a killer melody! Over the last four weeks alone, he’s Recorded so many other Hit in stock for Release Featuring Flavour, Vector, General Pype & Nigerian rapper L-J Saaaviour. PASSMARK is seriously on the grind and as always, “OTIPAMI” is sure to get you moving with Bouncing Beat from K-Solo!
Whether you have yourself in an OTIPAMI situation, one thing is certain – you WILL enjoy this track!
Don’t forget to hit up @passmarkofishal and show him some love!