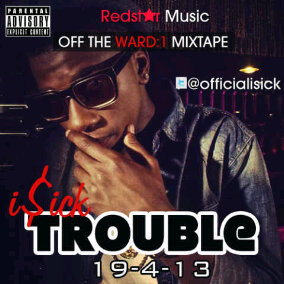 Isick who hails from Edo state Nigeria, is an undergraduate of computer science at leadcity university Ibadan Oyo state. I-sick started music at a young age, citing Jay z, Mode 9, Biggie and M-I as inluences. He started recording demos,freestlying and battling underground in Abuja where hip hop music is a way of life.

His underground hustle led to a chance meeting with the MD of HOT FM Abuja and Owerri Mr Ndu Scott and he immediately offered him a deal and signed him to hisREDSTAR MEDIA imprint and the rest they say is history,

Isick has performed at the grand finale of felaberation 2012 after performing at some of the biggest events in Abuja,like d fred bright show,crack ya ribs..and many more. opening for big acts like Tuface Idibia, MI Abaga, Wizkid. He is currently working on his debut album and mixtape with prolific producers and artistes like Mr Seth, Itskandysugabeat, and artistes like Harrysong.

His singles such as KEMAJO,YOUR NAME, KOMUJOJO,HOMETOWN, and recently released GRIND ON ME….have been gettin airplay nationwide respectively.

Isick is set to release his forth comng Ward 1 Mixtape Album on the 26th of April at Cubanna in Abuja.
“Trouble” is a single off the forthcoming mixape which he features the likes of Eva,Tekno, Mish, Fo and more.
Listen and Enjoy!
DOWNLOAD
CONNECT WITH ISICK
Twitter @Officialisick ,
www.reverbnation.com/isick
FOR BOOKINGS
Twitter: Follow @redstarrmedia
Email: [email protected] or call 08060897321 for bookings.

The nomination list for the 2020 Headies Awards was recently unveiled on the 4th of December. Fireboy DML, Wurld, Burna Boy swept Nominations with artists...
Read more