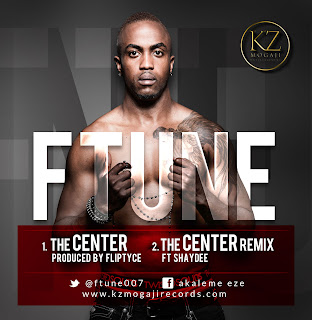 Following the release of “Invade Your Space” earlier in May, UK-based Nigerian Pop/Rap rising star F TUNE is back with a new single titled “The Center” and has also joined forces with E.M.E’s very own SHAYDEE to release an excellent new remix single “The Center (Remix)”, produced by prolific beat-maker Fliptyce who has previously with the likes of P-Square, Dammy Krane and Yemi Alade among others.

Driven by thumping bass drums and lush synth arrangements, the smooth mid-tempo dance musical backdrop sees F Tune displaying his versatility and artistic flair as he delivers a captivating rap/vocal flow all over the song which makes for an infectious listen. The hugely talented and sought after E.M.E recording artist Shaydee then brings “The Center (Remix)” further to life with his buttery smooth vocal display and amazing harmonies.

Listen and enjoy both “The Center” and “The Center (Remix)” below and make sure to look out for the official music video coming soon featuring Shaydee, before F Tune debuts his forthcoming album later this year via KZ Mogaji Records…