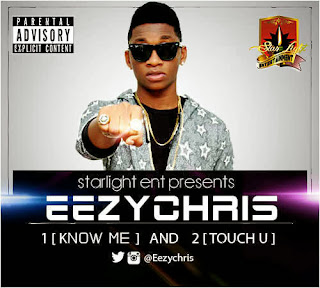 Emmanuel E. Udo prevalently known as EezyChris is a 200level Business Administration student of Houdegbe North American University Benin (HNAUB), he professionally delved into music in the year 2009.
Multitalented EezyChris recorded his first track at the age of 14, he has shared the stage with the likes of SeanTizzle, SoundSultan, Iyanya, Olamide, Reminise and so many topnotch artistes in Nigeria Entertainment Industry.
18-year-old EezyChris was recently signed into StarLight Entertainment, an entertainment outfit aimed at producing quality acts and giving the world the best.
EezyChris says with his versatility, he will make the industry more interesting and industrious.
StarLight Entertainment presents to you, two new smashing hit singles, “Know Me” & “Touch U” by EezyChris, produced by@XdBeatz.
Download and enjoy the tuneful tracks brought to you by StarLight Entertainment’s act, EezyChris.

Nigerian Female Disc Jockey, DJ Cuppy got her wishes granted a few days after she requested an iPhone 12 as a late birthday gift. On...
Read more

Ghanaian dancehall sensation, Larruso is back with the remix to his trending project, “Gi Dem”. On Gi Dem Remix, Larruso calls on the Ghanaian singer,...
Read more