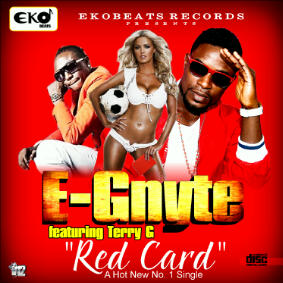 Austin Izunwa popularly known as *E-Gnyte* has finally dropped his highly anticipated new single “Red Card” featuring Everybody’s favourite MADMAN and “Terry G”. Red Card is yet another hit song that has been tipped to become a club and party anthem and guaranteed to set dance floors around the world on Fire in 2013/14 by industry big wigs. Red Card is a delicious blend of energy and style from E-Gnyte, and Terry G over a fabulously produced up tempo club beat.

BREAKTHROUGH AND COLLABOS
E-Gnyte emerged in the Nigerian music scene with his Hit song “This Kind Party” featuring ace super producer and hit maker J Martins. Since then E-Gnyte has provided us with a string of hit songs including Ebelebe, Iworiwo and Marry Me. His Hit song KoKo Ti KoKo featuring LKT is presently enjoying massive airplay on Radio and TV Stations all over Africa and in Europe.
Artists that E-Gnyte has collaborated with include Terry G, J. Martins, Reminisce, Joe_El, Samclef, LKT, Side One, Vector, M-Kaze, Blackout JA (UK)
E-Gnyte, who also speaks and sings fluently in French, is a breath of fresh air with a Feisty singing style that has endeared him to fans. He has an army of fans all over the African continent and his ability to sing in French has endeared him to French speaking countries. He fans also span across Europe, the USA, Canada, China, Singapore, Malaysia and India.
E-Gnyte is a humble person when not performing and this stems from his humble beginning. His humility is yet another quality that has endeared him to fans, fellow artists and industry bigwigs who are supporting him