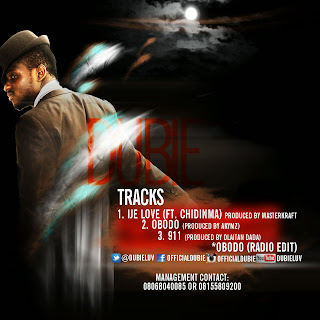 After a brief hiatus from the music scene, Dubie – former lead singer and songwriter of the band ‘The Pulse’ is back with a solo collection. The talented singer and songwriter who shot into the limelight after ‘The Pulse’ won the 2009 edition of the music reality show – Star Quest, has released his self-titled debut E.P – ‘DUBIE’ with three singles showing a diversity and uniqueness that will blow you away.

He enlists the vocal prowess of songbird – Chidinma for the highly melodic love song- ‘Ije Love’, on ‘Obodo’ he takes the tempo up a notch and the result is an upbeat party song and finally ‘911’ which has a more relaxed R&B sound.

Dubie’s undeniable talent is evident on the 2009 hit song ‘Sote Sote Sote’ which he wrote and produced while signed to Kennis Music. He later went on to feature American Rap Artiste – Busta Rhymes on the massive remix. This bold move would later pave the way for many other major collaborations between Nigerian and International Artistes.

Dubie dishes out thrilling performances with a passionate, silky voice and outstanding guitar talent. His lyrics are socially relevant, while at the same time being entertaining, comical and provocative with a political touch. His songs are a contemporary mix of live acoustic guitar and Afro pop sounds.