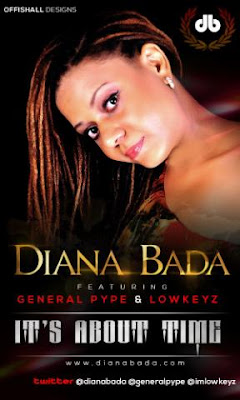 Diana Lolade Bada, stage name ‘Diana Bada’ is an Afro/European Jazz Musician. With her golden locks and alluring countenance, she fuses music from her African roots with HipHop, Reggae, Funk and refers to her style of music as ‘Afro Soul’ All these eccentric vibes can be heard in her previous singles ‘Fun Day’ and ‘Dem So So’ which are coupled with very colourful distinct music videos.

She moved back to Africa from Europe to promote her influential and unique style of music with an album titled ‘Wardrobe Sessions’, performing with her music band ‘D’expressions’ and collaborating with various musicians, such as Teemac, Ade Bantu, Olu Maintain, Mr Raw, Godwon, Ojb Jezrel, Rymzo and more.

Presently she has once again released a sizzling hot new single titled ‘IT’S ABOUT TIME’ !!! Featuring the 7 star General, ‘General Pype’ and the Razor-sharp producer, ‘Lowkeyz’.
‘IT’S ABOUT TIME’ is an electrifying up tempo track that keeps the body and soul moving to the rhythm, it’s a ‘Masters of Dancehall’ Collaboration, delivered to satisfy lovers of good music.

It’s definitely about time we get grooving and jiving to this energetic and spanking dancehall tune. Enjoy!