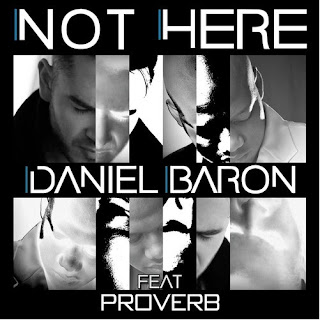 “South African’s popular hit maker Daniel Baron has joined forces with rapper, radio and television personality ProVerb on a smoking new single entitled ‘Not Here’.
The song was jointly written by both artists and features ProVerb rapping heart felt lyrics on the verses and haunting and melodic choruses by velvet-voiced Baron. “There is a trend for different styles of music to merge on a song, especially with rap and pop rock and I wanted to explore this in my own music,” said Baron, who released his debut album ‘It’s Time’ in September 2012 and has no fewer than 7 play listed singles on radio stations across South Africa, “Working with ProVerb was an incredible experience as he is a true professional with loads of talent and I really hold him in such high regard in the music and entertainment industry.” “I’m a fan of Daniel Baron’s music and when he asked me to collaborate I jumped at the opportunity,” said ProVerb, “’Not Here’ is such a personal song and the content is so specific that I had to tap into some emotions before I could even begin writing. Once I got the mood right and the correct tone and feel it was easy from there. I’m a conceptual writer, I love music with substance and this single is no different.”
Baron has had a string of hits on radio including ‘Paint My Blue Sky’, ‘So Much More’ and ‘See Thru’. His most recent single ‘All Over Now’ is a top 10 hit and he will be releasing ‘Different Feeling’ in the England in May. ProVerb recently released his fourth album ‘Fourthwrite’ which has been nominated for a number of South African Music Awards this year.
ProVerb is a well-known voice on 94.7 Highveld Stereo and is the host on South African Idols. ‘Not Here’ was produced by Brendan Campbell and is available for download as a single on iTunes and other online platforms. It will also be available on the Special Digital Edition of ‘It’s Time’, which will be released later in April.”
DOWNLOAD

Nigerian Singer, Davido shared a good news about his driver who is Getting Married. Davido announced that his personal driver, Doro, is getting married soon and...
Read more

Blaq Jerzee collaborates with Tekno on a new song 'One Leg Up'. Talented producer, Blaq Jerzee dishes out “One Leg Up”. He unites with Cartel boss,...
Read more