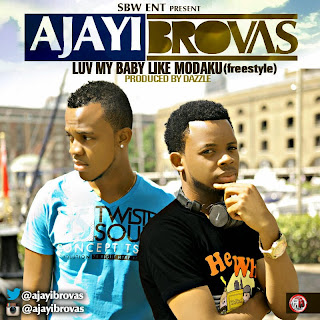 Here comes a freestyle single by the Ajayi Brovas titled ‘LUV MY BABY LIKE MODAKU (prod. By Dazzle for SBW Ent.)
Prior to the release of their new single, titled – Sweet Love Ft. Reminisce prod. By Sarz, The Ajayi Brovas known for hit singles including Appetizer (collaboration with 9ice), Get down Ft Terry G, Gbodow to mention a few isn’t slowing down at all as they are out again with a freestyle single titled “Luv My Baby”.
This is a cool nice tone and something to wet your appetizer ahead of their follow up single featuring Reminisce. The track Kososhi, with its video directed by Patrick Elis was their last official single