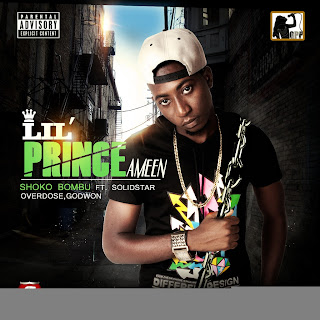 Check out this new single “Shoko bombu” from Lil’ Prince Ameen featuring SolidStar , Overdose And Godwon.
Produced By G-Maks. Download and enjoy!
“Lil’ Prince Ameen ( D Lyrical Pappy ) is a Pop/R&B singer, song writer and Vocal Eng./producer based in FESTAC Town, Lagos.
He has produced hit songs for the likes of Sound Sultan , Baba Dee , Faze ,Solid Star e.t.c. A graduate of LAUTECH who hails from Kwara State started music professionally in 2004. His first major single ‘One Way’ was released in 2005 with a complementary video. He released the smash hit single ‘Stella’ in 2010 which features Solid Star. With the release of the video the same year, it rocked the airwaves with regular broadcast on both radio and television networks.”
DOWNLOAD