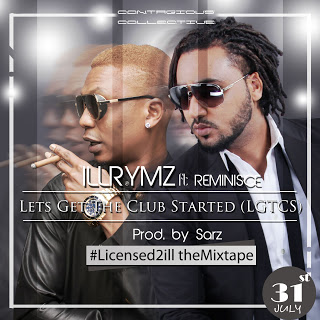 Let’s get the party started! Media personality Illrymz drops single ‘Get the Club Started’.
Seven days ago, he hit the music industry with an Afro pop single and alter ego, ‘Zanza’. Illie (Illrymz) is back again with the interest of party lovers and club moguls at heart with his latest single ‘Get the Club Started.’
The single which is sung alongside Reminisce and produced by Sarz is the second track on his debut mixtape, ‘LICENSED2iLL’ which is to be released sometime in August.
The Mixtape, is the prelude to his debut album slated for release early next year. The Mixtape is a blend of 16 mind-blowing tracks from a surprisingly talented and perfectly masterful artist. It is the new cool, the ‘next’, a new path for Nigerian and African music to follow. Two more tracks are going to be released for fans to download before the release of the mixtape.
With a fresh new name that embodies the real cheekiness and talented Rapper/singer persona, Illie – the artiste, is ready to introduce another side of his unique image, on an unsuspecting Nigerian audience.