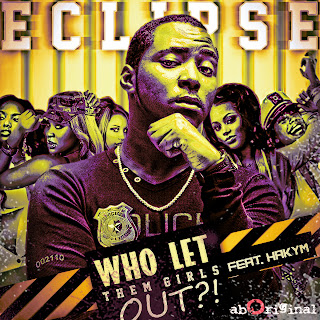 Fresh off his scene-stealing feature on the Team AbOriginal song “Leave Me Alone”(featuring his AbOriginal Music labelmates Barzini, Boogey & Ese Peters), rapper and producer Eclipse (aka the Demigod) is back with a new single, this time for the club scene- and he’s brought the “Lamba King” himself, Hakym, along for the ride.
An infectious, bass-heavy, ode to the joys of the night life, peppered with witty bars from Eclipse, and underpinned by an irresistible hook from Hakym, “Who Let Them Girls Out” is a guaranteed club banger, guaranteed to have all the girls (and guys too!) hitting the dancefloor the minute the song comes on.
“Who Let Them Girls Out” is the second single from Eclipse’s in-progress mixtape “City of Dreams”, scheduled for release later this year from AbOriginal Music.
Eclipse – an abOriginal production.