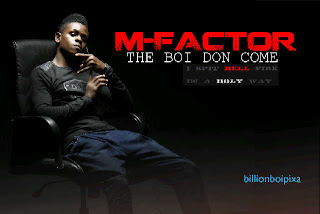 On the other side he was building his musical art into a lethal weapon) and when the opportunity of Taking part in the Friesland Campina sponsored Peak Talent show came along, he jumped at the Chance not knowing that his versatile and creative talent, alongside thousands of other very Talented artiste would spurn him as the winner of the nationwide talent show in 2012. Musically, he is inspired by what he has passed) through in life, and a need to display the fire Burning inside and the creativity embedded in his soul. He dreams of becoming an internationally Recognized rapper whose fan base would encompass all races and all ages wants to go as far as far As the wind of his in finite creative power would take him. The sky is not the limit, that’s where he Choses to start his race.

This is it! MFACTORS entry into the world  of music the highly rated and recommended “BREACH” (mixtape,)
And a preRrelease of his anticipated official Hit single ‘THE BOI DON COME’
This is MFACTOR in his element!
For!Artiste!Bookings!Contact:!
Tel: !+234!(0)8169139467
BB Pin 326420A4