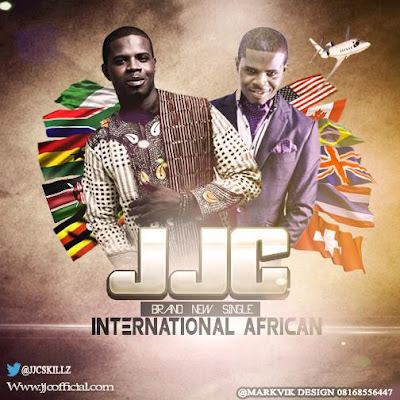 Popular African pride coroner JJC, has teamed up with renowned global producer/songwriter Mr. Green, who co-produced Madonna Grammy nominated single “Celebration” to bring you this new smash hit single, aptly tagged “INTERNATIONAL AFRICAN” Ft Kazz.
In line with the Electro Afrobeats, a new sound he created and recently got the whole of Africa dancing to his monster hit “AFRICAN SKANK”. International African is a celebration of the new age African who is proud of his/her roots globally.
Multiple awards winning Artist Abdul Rasheed Bello, popularly known as JJC Skillz, is a top notch artist, producer and founder of the multi-platinum award winning groups, Big Brovas & JJC AND THE 419 squad. Having produced singles for UK pop acts such as Ginuwine, Liberty X, Lemar, Big Brovaz and BigBoys, it’s no wonder he continually reels out smash tunes, that keeps the whole of Africa dancing time and again.
He accolades includes the creation of the Afropean sounds, a blend of Yoruba, a native language from Nigeria, mixed with English; Recently JJC introduced a new sound Electro afrobeats which is an electric blend/mix of African rhythm, techno, dirty Dutch and pop beats, all tuned to create an uplifting dance experience. JJC is mentor to numerous artists both United Kingdom and Nigeria.
The international African, whose monster hit “WE ARE AFRICAN” earned him the title “AWOO KING” and made the term AWOO, a verb of African pride affirmation worldwide, embodies the true ideals of an African.
The new single “International African is guaranteed to get you to your feet dancing and truly proud to be African.